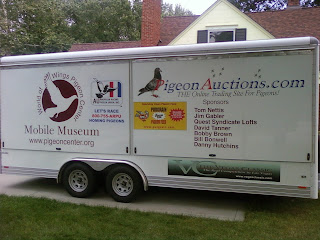 
On July 25, 2009 the Independent Homing Club held their 2nd Annual Family Picnic at the Club Headquarters in Columbia Station, Ohio. We had 19 Members and their families present. A total of 53 people.

Everyone had a great time, with plenty of food and beverages. We had games for the children and plenty of prizes for the raffles.

I would like to thank everyone who donated. The Cleveland Browns, Cleveland Cavaliers , The Cleveland Metroparks Zoo, The Cuyahoga County Fair, The Ohio State Fair, The Pro Football Hall of Fame, Bob Evans Restaurants, Foy's Pigeon Supply, Siegels Pigeon Supply and all the members who brought raffle prizes. A big THANK YOU, to Holly and Fred Wright for running the kids games and to all the people who gave a hand in the set up and clean up. Were looking forward to next year. I would like to give a SPECIAL THANK YOU to my wife Darlene Rostocil for being such a big help with everything I do. Don't forget we are planning on having a Clam Bake this fall.

Thank you to John Froelich for bringing the World of Wings Trailer and Display from Oklahoma. The Trailer was a big hit with everyone.
Posted by American Racing Pigeon Union at 3:17 PM