Thanks to all who helped with the school projects.
All lofts are ready for birds when you are ready to ship.
You can see construction on the newest loft at www.clarkdaleffa.com

Click on Photo Gallery and you will see Pigeon Loft in the gallery.

Pete has set May 2 has the pick up day for Spring Hill, FL.

Please encourage other flyers to enter birds in our race.

Vacaville racing pigeon best in the U.S.
By Melissa Murphy

But move over boys, Vacaville's elite group of athletes just grew by 1.5 pounds of muscle and feathers.

He goes by the moniker Mr. Dependable, and this tiny racing pigeon is just that, says his owner, Alex Bieche of Vacaville.

The bird was ranked the No. 1 male pigeon in the United States in 2009 - the seventh win for Bieche and the first for this particular pigeon.

"These are pedigree athletes," he explained. "There is a lot of competition out there. Racing pigeons is more interesting, though."

Pigeons, which often have bloodlines that are traced to Germany, Belgium and Holland, use their sense of smell and the sun's rotation to make it home without a compass or a map, he added.  "The goal is not only to find yourself back home, but to beat the competition," he said. "A lot of good things nature has for them to do what they do."

Bieche races hens and cocks. He raced the best hen, True Grit, in 2007, followed by the 2009 win with Mr. Dependable.

"To most people, this is just an average pigeon," he said, holding the prize bird. "But we refused the offer of $10,000 because we know he's much more valuable than that."

Starting at a young age, Bieche was interested in pigeons, and, years later, after leaving his general contractor career, he and his wife, Cindy, made pigeon racing and breeding a full-time pursuit.  "I took a hobby and turned it into a profession," he said, explaining that, besides racing, they also breed pigeons. "I'm busier now and we travel all over the world. It's a full-time job."

Mr. Dependable is officially retired and is only used for breeding purposes since he did so well his first time around.

"In the olden days, I thought you bought a good bird and raced them," Bieche admitted. "It's way more than that."

The Bieches live on 5 acres in rural Vacaville and keep anywhere from 200 to 300 birds.

The birds are divided into young birds (a year old or less) and old birds (older than one year).

During racing seasons, the pigeons are checked in, and travel Friday night by truck to the start. On Saturday morning they are given food and water and then released. Each pigeon has a computer chip attached to a band around its ankle.

When the pigeon returns to its specific home, it flies over a scanning device, which enters in their time.
The scanner is then taken back to headquarters to compare it to the other birds' times.

The duration of the bird's flight is then divided by the distance in yards, since each home is a different distance from the start.

Comparatively, according to Bieche, the birds average 45 miles per hour.

The birds are given points for how well they do in the races, which are added up at the end of season.

The Bieches are members of TriCity Homing Pigeon Club, based in Fairfield. The group not only races pigeons, but also hosts fundraisers to give to City of Hope, a cancer clinic and research hospital in Duarte.

For more information visit, www.tricityhoming.net or www.biechelofts.com.
Posted by American Racing Pigeon Union at 11:16 AM 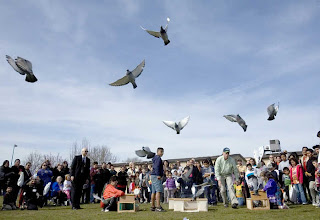 Jessie Garza reports that the Yakima Herald-Republic did a really nice story about the, “Stop the Gang Violence Parent/Community Forum” in the Sunday edition on the front page.  On the website, http://www.yakima-herald.com/ scroll down to Local News and the click on Forum, which takes hard look at keeping kids out of gangs. This will take you to the story. There’s some cool pictures including the bird release of pigeons. Randy Winters and his wife Rosie are members of the Yakima Valley Racing Pigeon Club.  They did presentations to the kids/students who came to the forum with their parents, about our sport of racing pigeons.  At the end of the forum, he released the pigeons, which was done to close the event with the “Bird of Peace”.
Posted by American Racing Pigeon Union at 2:27 PM 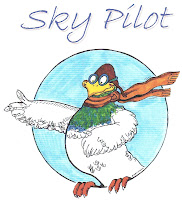 The club just held their March meeting.  They now have 13 members with 4 new added.  Guy provided 12 pigeons to elated kids, and he will continue to provide birds as needed.

During the club's meeting, members discussed and practiced catching, holding and releasing their pigeons.  Guy provided plans for construction of a walk-in loft.  The members will start building in a couple weeks.
Posted by American Racing Pigeon Union at 1:32 PM

The roof is on the new Clarkdale Bulldog Loft.
Perch/Nesting boxes will be made this week.
You can see pics of the students working on the loft on the above link.
Posted by American Racing Pigeon Union at 2:41 PM