WAYWARD PIGEON NOT IN KANSAS ANYMORE 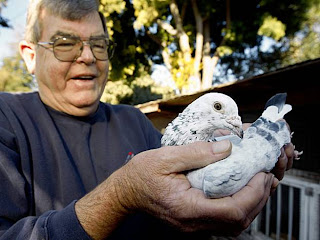 Cirrus the wonder pigeon will fly across the country early next week on his way back to his home in a suburb of Wichita, Kan. This time he'll take the plane.

His flight inside a special U.S. Postal Service mailing package will be the last chapter of a saga that took the bird from his pigeon loft in Kansas to a patio deck in Point Richmond on the shores of San Francisco Bay. His trip covered 1,700 miles and took more than four years.

Maybe he flew here, but no one knows for sure.

"It is absolutely amazing," said Olene Sparks, who discovered the pigeon on her deck on a cloudy afternoon last week.

She could tell this was no ordinary pigeon. For one thing, he was almost pure white, with a few gray marks. Most pigeons around here are muddy gray.

For another, the bird had an aura about him.

"He wouldn't leave," Sparks said. "He kept wanting to come into the house. I could see that he was a sweet bird, a nice bird."

Sparks is fond of animals, especially cats. But her cats are too timid to approach a pigeon with personality, so she brought the bird inside and took him under her wing. She knew neighbors who were fond of birds. Alma Wainscott, who has parrots and cockatoos, lent a large birdcage. Kevin McMullin knew about pigeons from his experience in rescuing a couple of orphaned pigeon chicks.

As it turned out, Sparks was right: Cirrus is no wandering street pigeon; he is a thoroughbred and his trip West was an odyssey.

Sparks and her neighbors noticed that the wayward pigeon had a blue band on his right leg. It said WICHITA KS and had a serial number. There's no place to hide in the Internet age, even for pigeons, which can live up to 15 years. An Internet search led the pigeon detectives to the Wichita Friendly Pigeon Flyers Club. The serial number led to Chuck Miller, who works in the aircraft industry, lives in the Wichita suburb of Haysville and is a pigeon racer.

"I remembered that bird, of all the birds I have," he said in a telephone interview. He has about 100 birds, 50 racers and 50 breeders.

Miller said he bought the bird at auction for $150. He had good bloodlines - the father was a champion from the noted World of Wings loft in Oklahoma City; the mother was from pigeons owned by Leo Claussen, a noted Belgian pigeon racer.

Pigeon racing is one of the world's oldest sports, and homing pigeons, once used to carry wartime messages, can travel long distances. Miller's racing birds have flown over 500 miles in 12 hours, the time registered by computer chips attached to a leg.

"You know racing homers are like thoroughbred racehorses," Miller said. "The better the bloodlines, the better they race."

Flew the coop
Miller thought Cirrus might be a winner too - until he flew the coop.

"Well about four years ago, I guess, when I was trying to settle him"- a pigeon racing term for getting the pigeon to return to its home loft - "I let him out and sometimes, when they get outside they just go," Miller said ruefully. "He just kept going."

Nobody can say why or where the bird went. At some point, he must have realized he wasn't in Kansas anymore and lost his bearings or upset his homing instinct. It might be that the bird was picked up by another pigeon racer, taken to California and released. Or maybe he flew from loft to loft. Or maybe, he flew all the way to California, over the Midwest, over the Rockies, over the desert, over the Sierra Nevada. About 1,700 miles as the crow flies.

"Can you imagine the things he's seen?" said Miller.

Cirrus spent only a few days in Point Richmond. Sparks located Dave Canning, who belongs to the Fremont Pigeon Racing Club. Canning had space in his loft in the East Bay and took the bird in.

"He was totally exhausted, and a little sick," Canning said, "His spirit was low."

Canning gave Cirrus some medicine and put him in with a female pigeon. "He's looking good now," Canning said.

Canning had planned to ship Cirrus back to Kansas on Tuesday, a trip that takes two days by Postal Service. But the post office advised him to wait because of the Thanksgiving holiday. The post office is no place for a pigeon on turkey day.
Posted by American Racing Pigeon Union at 2:34 PM

"The members of the Woodlawn Racing Pigeon Club in San Antonio cut our operating expenses in half by each member hauling the races ourselves. Besides cutting costs, we had the benefit of having experienced pigeon men at the release point describing the weather conditions to our race secretary back in San Antonio."

Here is one such release from Van Horn, Texas. 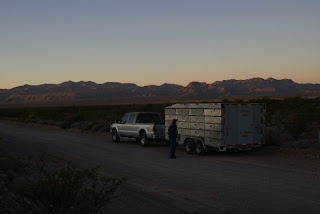 Setting up the release for the A race for 7:45 am release. 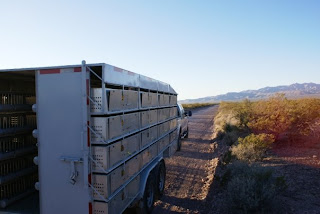 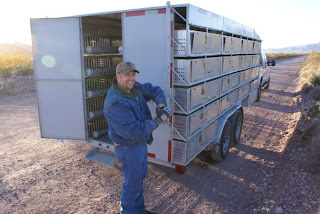 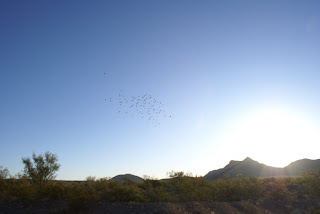 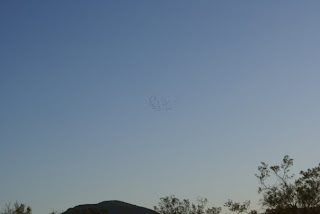 
Posted by American Racing Pigeon Union at 11:14 AM

I often think of my dad repairing the skins of the Spitfires and Hurricanes that were shot to pieces by Messerschmits, Focke Wulfs and ground fire over the Dutch coast during the Second World War. He didn't talk about war much, except to say that most of the time he was scared out of his wits. But David Archibald Bird was not the only "bird" over there fighting the Nazis.

While many of us refer to them as "winged rats" or "flying bags of disease," the lowly rock pigeon has played a very significant role during a number of wars, notably in both World Wars and as recently as the Korean War.

Known as homing or carrier pigeons, these birds have a remarkable talent for finding their way back to their loft over distances of thousands of kilometres and from unfamiliar places in all kinds of weather. They have been valued as faithful carriers of messages during times of both war and peace.

War pigeons were parachuted behind enemy lines in containers for use by the resistance to carry information critical to the Allies. Other birds were released from mobile lofts, tanks and aircraft to take vital messages back to headquarters. Naturally, these actions made them targets for enemy soldiers using not only guns but trained falcons. Tens of thousands died and a number became feathered folk heroes.

One such decorated bird was G.I. Joe, a genuine hero during the Second World War. Bred by the U.S. army Signals Corps in 1943, G.I. Joe lived for 18 years. In its first year of life, the bird served in Colvi Vecchia, Italy. It flew 30 kilometres in just 20 minutes and saved the lives of 1,000 soldiers by carrying a message to cancel a bombardment of Colvi Vecchia, which the British had entered ahead of schedule. For the feat, the bird was awarded the Dicken Medal, the only U.S. war pigeon to do so.

Another famous war pigeon was Paddy, an Irish war hero. He was apparently the last pigeon to be released by the Americans in Normandy, but the first bird to arrive in England with news of the success of the D-Day invasion. According to his trainer, John McMullan, Paddy was the best of the best.

The tenacity of these birds to get back to their lofts is best illustrated by the story of Cher Ami, a black check cock. This bird was awarded the French Croix de Guerre with Palm for heroic service. On its final mission, in October 1918, the bird, having been shot through its breast or wing, delivered a message in a capsule hanging from a ligament of its shattered leg. The contents saved the lives of 200 U.S. soldiers.

The pigeons did not perform these duties without help - they had handlers. One of the most famous was Col. Clifford A. Poutre, chief pigeoneer with the U. S. army signal corps pigeon service from 1936 to 1943. Widely acknowledged as the world's foremost expert on military uses for pigeons, Poutre streamlined the U. S. army homing-pigeon training and taught the birds tricks for day or night messenger duty. He also discarded the old method of starving pigeons in favour of kindness. He essentially showed that homers will return home because they want to, and not, as during the First World War, because they were hungry.

A great army racer was Always Faithful, 1935 winner of a 1,160-kilometre race from Tennessee to his New Jersey loft in 15 hours, 39 minutes, 9 seconds, an average speed of 1.233 kilometres a minute! Colonel Poutre retired from the army in 1960 after 31 years of military service.

Alessandro (Al) Croseri, who was kind enough to bring the exploits of these special birds to my attention, has captured their story in his 8-minute DVD film The Flight , a beautiful and moving homage to the sacrifices that these homing pigeons made for us in the wars. Croseri also wrote and produced a longer film The Pigeoneers, featuring Poutre.

Next time you scowl at a pigeon in the streets, think about how these birds helped saved thousands of soldier's lives during war.

For info on these films, visit store.pigeonsincombat.com.
Posted by American Racing Pigeon Union at 9:58 AM

GREENWICH -- These birds get a bum rap. Thanks to their urban cousins, they get pigeonholed. 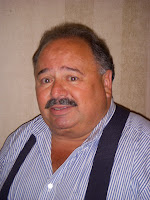 But watch what you say about pigeons when you're around Bill Desmarais, who, with his wife, Paula, owns about 250 of the racing and show variety of the birds.

"These are what you call thoroughbreds of the sky," he said.

The couple made the three-hour drive Saturday from their Fall River, Mass., home to Old Greenwich for the National Show Racing Pigeon Classic.

Some 500 pigeon-lovers, not to mention 600 birds, flocked to the Greenwich Civic Center for the all-day show, a confluence of breeders, judges and competitors.

During World Wars I and II, pigeons were often used by the military to carry messages because of their innate homing senses and their ability to fly great distances, he said.

In competitions, a flock of pigeons is released at a common location and timed individually on their journey back to their own homes.

Many have a tracking device such as a computer chip or GPS that allow their owners to monitor them.

"Since the beginning of time, they've been carrying messages," said Desmarais, 59, a certified judge at pigeon shows who is northeast regional director of the American Racing Pigeon Union, which has 10,000 members.

Adult pigeons can fly 600 miles or more, according to Desmarais, who had one find its way home from Sandusky, Ohio.

To help motivate male pigeons to return home, Desmarais said, another male pigeon is often introduced into their individual coop, where a female awaits for breeding.

"They come home as fast as they can," said Desmarais, who works in property management with his wife.

Don't be confusing racing and show pigeons with the variety found in cities, however.

"See how they stand? They stand like football players, athletes. Each pigeon has a pedigree," Desmarais said, pointing to one of the many cages inside the civic center.
Posted by American Racing Pigeon Union at 4:27 PM

The bird flew 205 miles at a rate of 47 mph. Brent flew past at least twenty other jr. fliers including super competitor Ben Crain.

Congrats to Dave Dunn from WA and SPO 454

They fly the memory card from a photographer snapping rafters near the start of their adventure to a processing base at the end, where the daredevils can collect their finished photos.

The service is much quicker than driving the snaps to the base in the Rocky Mountains, in Colorado, US. 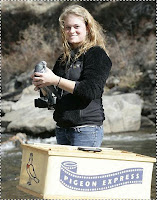 Posted by American Racing Pigeon Union at 9:17 AM