Remember the days?  Well, maybe not if you are under 50 years of age or are not familiar with pigeon racing at all.  Those who are, remember the clocks, the baskets, the clubs, the thrill.  These things have given way to new technology and new equipment.  We still have the thrill, but the old, replaced items are put in a closet or a storage building to be found years later.

If you remember your father, grandfather, or great grandfather and recall his favorite pastime of racing homing pigeons, you maybe think back to those items of comfort that ended up in your closet or storage building as a momento.  But then it comes time to clear the space, remove the old, embrace the new and, oh it is so hard to let go sometimes.  Will someone else treasure it?  Will someone else even use it?

Tom Burnett shared one of these with us.  It is a basket.  The picture may not do justice to the old beauty.  We turned the picture on its side to better reveal.  Tom's wife's grandfather was in racing.  She is finally willing to let the basket go.  We post this information as a favor to those who might have a desire to collect these items.  Maybe the memories will live on . . . . 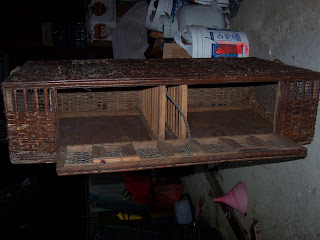 Tom is in Florida and can be reached via email at tburnett@windstream.net.
Posted by American Racing Pigeon Union at 2:03 PM

McPherson, Kan. -
Gail Huddle is into racing. But you won’t find him at the track or on the road, you have to look up to see Huddle’s race in action. 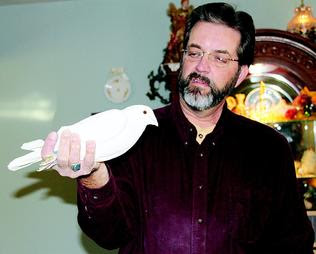 Huddle is one of the state’s top pigeon racers. The McPherson resident grew up with birds and picked up bird racing from neighbors. After a 40-year absence from the sport, Huddle ran into a friend that raced pigeons and was inspired to get back into the sport. Now retired, he enjoys raising, training and racing pigeons. He spends hours each day caring for, cleaning up after and working with his 25 birds.

The champion was determined by points which were given by American Racing Union (AU) judges who follow strict areas of criteria when considering all aspects of the bird. In general, points are given in numerous areas including the bird’s build, weight, temperament, feathers, appearance, health and overall stature of the bird.

Huddle trains the birds from birth and works with them daily in the spring, summer and early fall months. His birds can be seen making a daily path around his neighborhood and once conditioned, he will take the birds out of the area and release them to fly home. Pigeons are born with a homing sense which they use to find their homes from nearly anywhere in the country.

“The bird’s goal is to come back home,” Huddle said. “The birds will fly when they are released and will immediately begin to make their way home.”

The races range in distance from 100 to 600 miles. The birds average 45 miles per hour when flying but can reach speeds up to 75 mph with ideal weather conditions and a tail wind.

Racing birds, like horses and dogs, are bred to carry on desired skill sets and characteristics. Racing pigeons can cost anywhere from $10 to $250,000 with most quality racing birds costing at least $100.

Earlier this year, with several awards under his belt, Huddle made the decision to turn his passion into a business.  Huddle and his wife, Donna, started “On The Wing,” a white dove release business.  “I wanted to make a business out of it,” Huddle said of his passion for birds. “So I decided to see if I can have fun and have a business at the same time.”

The Huddles promote their business as a white dove release but the couple actually releases pure white pigeons.  Doves do not have a homing instinct and when released will often perch on a nearby tree instead of taking off and returning home.  “Releasing doves just isn’t humane,” Huddle said. “Doves purchased for release do not know how to care for themselves and will perish if not caught.”

The Huddles said they enjoy providing something that can symbolize a variety of emotions and situations. The birds can be released by a couple just married or a family that has just lost a loved one. The birds can be released from a variety of containers and will always return to Huddle’s home, which is also their home.
With his new business in place, Huddle said he intends to continue to raise and train birds but isn't planning to enter any competitions.

Posted by American Racing Pigeon Union at 6:32 AM

WASHINGTON (AP) — At first glance, the animals in three small, white-painted wooden buildings in John Celia's backyard look like the street birds that get little respect in cities all over the world.

But look a little closer and you see that these pigeons are different: clean, sleek, shapely, and with an alert spark in their eye.

What's most remarkable, though, is listening to Celia talk about what these specially bred racing birds can do. 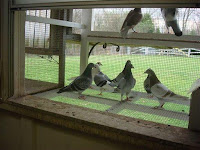 Celia bought his house in the suburbs to make room for the racing pigeons, animals that by some accounts are getting more popular. The American Racing Pigeon Union has nearly 10,000 members across the U.S., and gains about 100 new members a month.

Racing pigeons are fitted with a leg band and transported to the starting location in a specially designed truck that can release them all simultaneously. As each bird returns to its own home loft, the owner removes the band and drops it into a device that records the return time. (Newer systems are wireless, with the bird simply passing an antenna, like an automatic toll-paying device.)

Since the distance to each home loft is different, the winner isn't the first to arrive. Rather, the average speed of each bird is calculated and the fastest one wins. (Racing pigeons can fly 40-60 miles per hour.)

Training a homing pigeon to race doesn't mean teaching it to fly home — they do that by instinct. Breeders have to sell a bird before it's a couple of months old, because where it lives at that point is where it will always return for life.

So preparing for a race is partly putting the birds into the best physical condition, "like an athlete," says Celia.

Also, he says, "young pigeons, just like school kids, they have the tendency to fool around," so they need to learn to come directly home and fly into the loft to have their time recorded. "If a bird comes home and sits in a tree, it hasn't come home as far as the clock is concerned," Celia says.

Celia has been in the sport for over 40 years, but there are much younger enthusiasts as well. Wade Tischner of Cedar Hills, Utah, got started in the sport three years ago when his then 6-year-old son asked for racing pigeons.

They're not a cuddly pet, Tischner says, although they clearly know their owners. Rather, the attraction is the amazing natural abilities of such a small creature.

"You get up in an airplane and you look down ... you can see big bodies of water and such, but to find an individual house is amazing," he says.

The care of these birds is not a casual matter. Tischner's family raised one fledgling by hand when it got displaced from its nest, feeding it around the clock for a week, and Celia has champions whose reputations are known across the country, with pedigrees that go back a dozen generations to his very first birds.

It might be hard to imagine putting that kind of effort into an animal and then letting it loose several hundred miles from home. But racers have faith in their birds' abilities . . .

. . . "I let them go every day, and they're free to go or stay," says John Froelich of Westlake, Ohio, who runs the Web site PigeonTV.com. "I get birds that sit on my shoulder and eat peanuts out of my mouth. They love to be at home, just like a dog loves to be at home."
Posted by American Racing Pigeon Union at 10:24 AM 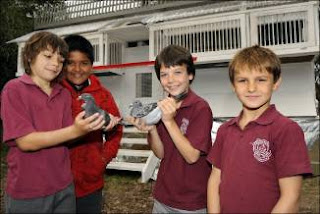 BOYS at Tuggerawong Public School are now the carers of about 50 pet pigeons.

The feathered friends arrived on Tuesday as part of a project designed to teach students responsibility and ownership.

Prominent pigeon flyer Don Brierty, of Davistown, recently retired from the sport and donated his loft to the school.

Father David Woodhead, who is involved with the Wyong Pigeon Racing Club, and friend Paul Holz have volunteered their time to help the boys renovate and paint the loft to cater for the school’s new pets.

“We have been in discussion with pigeon owners who said it was a fantastic idea to get the boys involved,” she said.

“It is a positive exercise to promote dependability, maturity and sensibility among the students,” Ms Kable said.

The students will learn to feed, water, maintain and clean the loft, and also race the pigeons.

“The Central Coast Racing Pigeon Federation and the school’s Parents and Citizens Association donated $500 towards the project, which we are very grateful for,” she said.

“The project will not only benefit the current students, but also students in the future.”
Posted by American Racing Pigeon Union at 2:45 PM