Homing Pigeons and the Signal Corp


A variety of animals have been used alongside Soldiers in the history of the military. Soldiers rode horses, and military working dogs sniff out bombs.

During World War I and World War II, homing pigeons played their part in helping the Signal Corps fulfill its mission.

The use of carrier pigeons dates back more than 2,000 years to the ancient Roman Army. Many countries used pigeons during World War I.

One of the most famous pigeons of World War I was Cher Ami. He carried 12 important messages including one which saved American Soldiers trapped behind enemy lines in France in October 1918.

Surrounded by the enemy and with American artillery coming at him, Maj. Charles Whittlesly sent out a message on Cher Ami with the troops’ exact location. Cher Ami was shot at and wounded, but managed to fly 25 miles in 25 minutes. He got the message through and the American artillery ceased, saving 200 men.

That last flight severely wounded the bird and he lost his leg. The men of the unit he saved carved him a wooden leg.

A pigeon could cover an average of about 300 miles; with the longest pigeon journey recorded of 1,000 miles, according to Anzuoni.

During World War II, pigeons carried encrypted messages concerning the invasion of Normandy and other battles. They were vital in getting messages to hard to reach areas such as the mountains of Italy, he said.

Most of the people who served as pigeon trainers and handlers in the Signal Corps had worked with pigeons in the civilian world, he said, and some were familiar with breeding and training them.

Pigeons would be taken miles away from their home station and a capsule attached to their leg held the message. The pigeon would be released and fly home.

One brave pigeon of World War II was Liles Boy. The preserved bird is on display at the Signal Corps Museum. Liles Boy carried 46 messages to the front lines in Italy. He is credited as delivering several of the most important messages of the Italian campaign according to the exhibit.

Pigeons were used until 1957.
Posted by American Racing Pigeon Union at 1:40 PM

Race lofts are preparing for the big event in November. For the convention race, the following lofts are expanded to accommodate the anticipated 2000 birds.

World of Wings
Randy Goodpasture is the handler. The loft is 85 feet long x 10 feet wide and has 700 perches. He will be taking 500 birds so there is plenty of room, plus the birds have access to the hall for the day, which gives them plenty more added space. 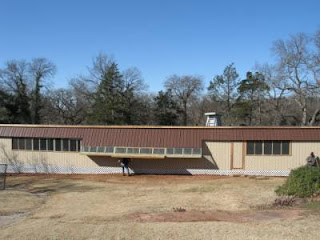 Frank Greenhall Memorial National Youth Race
http://www.2010auconvention.com/youth-race
Continental Breeding Station is the location, and will be a treat for attendees! The loft handler is the renowned Rick Mardis.
Posted by American Racing Pigeon Union at 3:53 PM