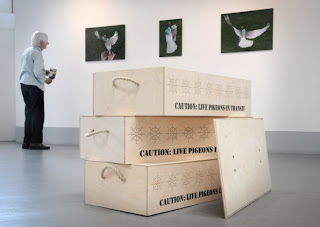 DURING the war, the country was known for the bravery of its airmen with epic encounters such as The Battle of Britain etched in the memory for years to come.


But what might be less well-known is the role another highly-significant air-borne force played in the fighting - the humble pigeon who proved a vital way to relay messages.

At the outbreak of World War II. 7,000 of Britain’s pigeon fanciers gave their birds to the war effort to act as message carriers.

Such was their role the National Pigeon Service was formed during which nearly 250,000 birds were used by the army, RAF and the Civil Defence Services including the police, fire service, Home Guard and even Bletchley Park.

Since the beginning of the 20th century pigeons have been used for surveillance purposes, escalating during both world wars. In World War II, every military aircraft leaving Britain was recommended to carry two.

According to the Royal Racing Pigeon Association, aircraft carried pigeons in special watertight baskets so if the aircraft had to ditch, the pigeon could take a message back to land.

“Thousands of servicemen’s lives were saved by these heroic birds that often flew in extreme weather and sometimes under fire,” a spokesman said.

Pigeons carried messages in special containers - photographs of which are just one of the items on show at a special Lynn exhibition now being held.

Birds were dropped by parachute to help the war effort, photos of pigeons in flight also part of the display which is taking place at The Shakespeare Barn at Lynn Arts Centre galleries.

Australian-born artist Lyndall Phelps was particularly interested in devices that denied pigeons their natural behaviour, such as the message carriers that were strapped to their bodies with elastic harnessing, and being attached to parachutes.

Replicas of the harnesses are also included in the exhibition which, called The Pigeon Archive, includes a range of differing media from large-scale photography to objects which have been meticulously made.

It also includes fascinating video footage taken from a bird in flight.

The enigmatic film, shot in 2008, shows a pigeon’s eye view of the Cambridgeshire Fens after a light-weight surveillance camera was strapped to a pigeon’s body and the bird then released.

It is poignant that, in reality, large numbers of pigeons lost their lives, through starvation, being killed by the enemy or exhaustion and exposure due to harsh conditions on homing flights.

“This exhibition is sure to make you reconsider the dubious reputation of these humble birds,” a spokesman for the arts centre said.

The exhibition, which opened on Sunday (July 18), takes place until Saturday, August 14.
Posted by American Racing Pigeon Union at 11:15 AM