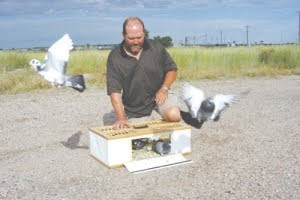 All types of birds, from parakeets to cockatiels, have been valued as pets for thousands of years.

But one Torrington resident has taken his fascination with homing pigeons to a competitive level.

“I was 14 when I flew my first race,” Allen Hunter said in recollecting the start of his racing career. “Years ago, my dad raised pigeons and we found some in a building that was being torn down, took the young ones and hand-raised them. After that I was kind of hooked on ‘em.”

Hunter, who owns Heartland Embroidery with his wife Deb, owns about 150 pigeons. He has been training, caring for and racing them competitively for more than 40 years. In 1986, his birds placed first, second, third, fifth and seventh overall in the nation.

He recently drove a boxful of pigeons to the Iowa-Nebraska state line for a workout, releasing them to fly home 450 miles to their loft in Torrington.

“I left when they did. It took me about eight hours to drive home,” Hunter said. “I was home about 20 minutes and here come the first couple, droppin’ out of the clouds. The fastest race that I’ve clocked mine at is about 1,400 feet per minute. And they will go faster.”
Posted by American Racing Pigeon Union at 2:34 PM