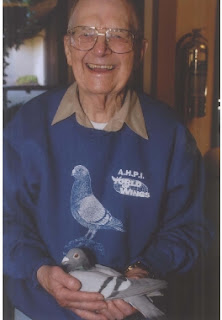 Woodinville Lions Flight for Sight hosted the Puget Sound Futurity race this past weekend, turning the final race of the season into a community fundraiser as well as a fun event. Two hundred and thirty birds competed from 25 regional lofts with one hundred and eighty eight birds were sponsored with a $5.00 donation for the Lions clubs local Sight and hearing programs.

The birds were released Saturday, September 26th. at 8:00 am from Tri-cities, OR, a distance of 355 miles from Woodinville. The winning bird, a Blue hen, sponsored by Kelly-Power-Ellis, was clocked at 2:17:08 PM at the loft of 90 year old Elwin Anderson of Everett. The pigeon, having flown the 347 miles distance in just over 6 hours, at an average speed of 1621.781 YPM, (Yards per minute), just over 55 MPH!

Of the 230 birds sent, 85 made the flight in less than 7 hours to finish in the points.

For more information regarding the Woodinville Lions club or the Flight for Sight race contact Herb Cartmell at 425-486-4725 or visit their website at http://woodinvillewa.lionwap.org
Posted by American Racing Pigeon Union at 11:55 AM