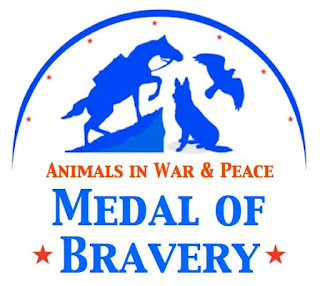 A special event is taking place tomorrow in Washington D.C.  Robin Hutton, who has written two books on amazing war animals, has organized and orchestrated a presentation ceremony to recognize GI Joe and Cher Ami for their wartime service.  After Robin finished her first book (Sgt Reckless: America's War Horse (NY Times bestseller), she nominated and received the Dickin Medal for Sgt. Reckless in 2016.  At that time, she wondered why America did not have a medal such as the Dickin.
While doing research, Robin discovered GI Joe and all of the amazing animals that received the prestigious Dickin Medal during World War II.  She followed with a second book, War Animals: The Unsung Heroes of World War II.  Robin began a campaign to honor the animals in America.

That campaign has led to a special ceremony to be held on November 14, 2019, at the Rayburn House Office Building on Capitol Hill in Washington, DC.  This new award is for animals that have served with our military during wartime, or a police dog or first responder/fire dog that has done an exceptionally brave act on the home front.  It's called the Animals in War and Peace Medal of Bravery and is commensurate with Great Britain's Dickin Medal that Reckless was awarded in 2016.  The medal is being presented at an inaugural ceremony and reception for 200 people.  The medal has potential to possibly become a Congressional award.

Six posthumous medals will be given by Members of Congress and our sponsors to animals that served in World War I (Cher Ami, pigeon); World War II (Chips, Army dog and GI Joe, pigeon); the Korean War (Sgt Reckless, horse); Vietnam (Stormy, dog), and the war in Afghanistan/Iraq (Lucca, dog).

In addition, two to four medals will be given to current military animals, first responders and their handlers. These animals are still alive and will represent any of the five military services or police forces/first responders for their bravery and service in defense of our nation.  The first live dog will be Multi-Purpose Canine (MPC) Bass. Bass is a Belgian Malinois who served at Marine Corps Forces, Special Operations Command (MARSOC) for the past six-and-a-half years. It takes an exceptional animal to become a Multi-Purpose Canine for a Special Operations Command. All MPCs must be able to detect explosive materials, perform team protection through controlled aggression, and track the movement of a person or group with their nose. Bass is no exception. Bass went on 350 patrols in Afghanistan/Iraq and will be attending with his handler, Staff Sergeant Alex Schnell.

For the ceremony, GI Joe is coming out of the Army storage and will be present for honor recognition.   The Army is also going to be bringing Cher Ami's French Croix de Guerre for attendees to enjoy. We will also have other military working dogs there with their handlers for people to talk to. It promises to be a very special event.  The same jeweler that produces the Dickin Medal is designing and producing the new medal. The designer is also the monarchy's medal maker.

To honor these heroes in a larger and more permanent way, this medal ceremony will also launch a new International War Animals Museum, hopefully to be placed in Washington, DC.  The medals will be displayed in a special exhibit there. (However, Cher Ami's medal will go to the Smithsonian, and GI Joe's will go to the new Army Museum in Ft Belvoir.) Until the International War Animals Museum has a final place, the organization will also be providing traveling exhibits to other museums around the country that want to feature these incredible heroes. This museum will be a wonderful place for people, especially children, to come and learn history through the eyes of the animals for generations to come.

Churchill Loft is the coup where decorated pigeons were housed.

Posted by American Racing Pigeon Union at 11:07 AM