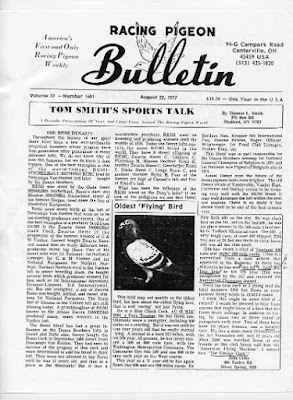 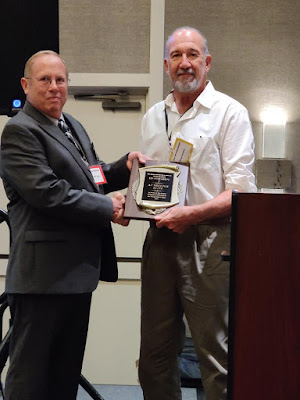 The following information about AU-68-WDC-2204 Blue Check cock was taken from the August 22nd issue of the Racing Pigeon Bulletin in 1977 (Oldest Flying Bird) and if you do remember this great bird there’s a good chance you’re eligible for Medicare. I may have remembered it during that time, but I sure do remember it in the late 1990’s.

I had flown home for a visit with my folks and my Dad was all excited because he had recently acquired a bird that was supposedly a descendant of the Vintage Cock 2204. He had pictures and articles about this famous bird. Not only was this bird an award winning accomplished long-distance racer…. It was Pure Trenton!!!! To my Dad, this bird was a Super-Star and a bird most could only dream about.

This Bird was flown continuously starting as a youngster and flew his first 500 as a yearling. He never missed a 500 or 600-mile race with the Washington Metropolitan Concourse and was flown up to the age of nine. He had many 1st 2nd and 3rd place wins and flew 14 times the 500 and 8 times the 600. He was recognized by the AU and received the Registered Champion Award. In his racing career he had compiled over 13,000 miles in recorded competitive racing.

This past November I had the honor of attending the AU 2021 Convention in Tampa Fl. Besides all the awesome things the AU has to offer at these Conventions I was there to pick up the AU Breeder Elite Award for my Dad, Ed Oshaben for his many decades of dedication to his Trenton’s.

During the lunch break on the Saturday of the banquet I spotted a table with two Gentlemen, both of whom were my seniors and I asked if they would mind if I sat with them. After a while one of the Gentleman said: Oh, you’re the Trenton Guy! Immediately the other Gentlemen started telling me how much he loved Trenton’s. He said his very first birds were Trenton’s, and he flew them for many years. Then he asked if I ever heard of the Vintage Cock? I excitedly replied: Yes, of course I have. He then told me he was the owner/breeder and handler of that very famous bird. My excitement was Sky High just to be sitting with this Guy!!! What happened next is the best part. He told me the Father of 2204 was from Art Nemechek and the Mothers bloodline was from that Oshbern (Oshaben) guy in Ohio. I about fell out of my chair, if my Dad would have only known… this most Famous Pigeon that my Dad so looked up to was of some of his bloodline. The Gentlemen I was talking with is John Celia, he lives in Silver Springs MD and is still a very active and accomplished flyer. After I told John who I was he was also excited as well. I pretty much latched onto his shirt tail and even later we sat together at the banquet. John, like many of that great generation, still reveres the old-bird long distance races.

Not only did I come home with a beautiful plaque honoring my Father, I got to become friends with a great man and a part of pigeon history!

Chuck Oshaben
Posted by American Racing Pigeon Union at 10:08 AM