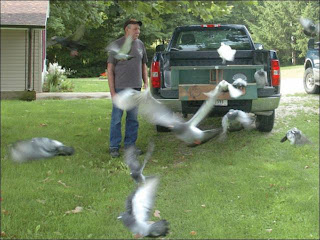 COVINGTON, Ind. — The wooden cage doors open and immediately there’s an excited shuffle of feathers. As muffled wing flaps fill the air, almost 60 pigeons take flight over the grass field in front of them.The flock moves almost in unison as the birds bank to the left and disappear behind a wall of trees.In most cases, a dedicated bird owner would chase the flock, trying not to lose sight of his precious pets. But not Charlie Coffing and Roger Hall of Covington, Ind. They sit back and watch, knowing almost exactly where the birds are headed.Hall and Coffing have been breeding, training and racing homer pigeons for almost a decade in Fountain County, Ind., enjoying a sport that, like soccer, receives a bigger following in Europe where it first began.The racing, for Coffing, developed from an interest he’s had since high school. He’d always assumed they were just run-of-the-mill pigeons being used.“But I learned more about it and it’s something that always intrigued me,” he said.The two men have raced their birds with a number of different clubs in Illinois and Indiana over the years and currently fly with the Central Indiana Racing Pigeons Club.For Hall, racing the birds is a hobby that has gained him recognition in years past, earning a national award among owners who fly younger birds and having a bird named as one of the top new fliers in the nation. Coffing has had his own share of success, winning a number of club awards.Racing pigeons — which originated in Belgium — is unlike most sports people have encountered. The birds are released from a location and expected to fly distances from 100 to 300 miles for young birds and up to 600 miles for older birds.Coffing said a good racing pigeon can fly at an average of 40 mph and up to 50 mph with a helpful wind . . . For racing purposes, the birds are ranked according to yards per minute that it is calculated they flew. An electronic pad placed at the entrance of their owner’s loft records when the pigeons arrive using a microchip band attached to the birds’ legs.The races are run from locations anywhere in the United States . . . The pigeons will use almost anything they recognize to find their way back to the loft. Coffing said any sort of visual references are used, ranging from rivers to highways. But the birds also have trouble breaking away from the flock, meaning the pigeons can sometimes end up in another loft.Both men try to train the birds, taking them miles away to prepare them for the direction and route a race may take them so they are used to the territory.Coffing and Hall are the only nearby racers, but they said other people on both sides of the Illinois-Indiana state line have shown interest in trying to get started.“To be able to work with something like this is something Roger and I enjoy,” Coffing said. “Most people, once they get into it, they get attached to the birds.”
Posted by American Racing Pigeon Union at 3:50 PM