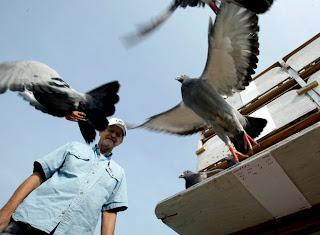 As published by the Milwaukee-Wisconsin Journal Sentinel.
excerpt

In racing, the sky's the limit
Club's competitive pigeons instinctively know to hurry home
By Meg Jones of the Journal Sentinel

Cottage Grove - Horst Schrank opened the slatted doors, and one by one the athletes hopped to the entrance and took off like F-18s lifting into the sky from the deck of an aircraft carrier. The homing pigeons' wings flapped and fluttered so loudly they sounded and felt like a rotary fan. High above Schrank's green Chevy Colorado pickup, the birds quickly grouped together. They circled and then, as if their tiny GPS systems had just powered on, they headed east and soon disappeared.
Even though Schrank's cruise control was set at 68 mph as he headed home to Hubertus on I-94, his truck was no match for his racing pigeons, who were all waiting in their loft when he pulled in more than an hour later.
In a sense, the retired machinist owns a sports team. But instead of demanding high salaries and no-trade clauses, Schrank's athletes happily compete for food, especially safflower seeds.
"They all have personalities. Some are alert and watch every move you make," Schrank, 68, said after releasing his birds for what's called a training toss in Cottage Grove last week. "Some are birds good for speed, while others are good for distance."
What's so special about these pigeons? Didn't Woody Allen call the ubiquitous pigeons "rats with wings"?
Racers such as Schrank quickly point out how their birds differ. They're bred for speed and a heightened homing instinct, which allows them to quickly return to their loft instead of hanging out in parks mooching off picnickers. That's why, flying at 45 mph to 60 mph, homing pigeons are sometimes called thoroughbreds of the sky.
Last week, Schrank released 160 young pigeons, including some owned by friends. He took his birds about 50 miles away so they would learn where they needed to break off from the rest of the pack and head toward home. He was preparing them for their first 150-mile race Saturday.
The night before the race, Schrank took 27 of his best racers to Gus Amann's Bar on W. Beloit Road. Along with other members of the Milwaukee Western Concourse, he checked in his birds, placed them in cages and then watched them get loaded onto a truck that would take them 150 miles to Iowa for release the next morning.
Holding up a pigeon with a leg band stamped No. 118, Schrank patted the bird's gray feathers and pointed out the nice pink breast. "This one is a good flier. I'm always hoping they do well," he said.
Because owners' lofts are scattered around southeastern Wisconsin, the first bird home doesn't necessarily win. Instead, it's whichever flies the most yards per minute. It's all done electronically with the band on the pigeons' legs triggering an antenna when they return to their lofts.
In a 100-mile race earlier this month, the winning bird flew almost 1,841 yards per minute.
A special bond
Dick Lipski of Milwaukee figures he spends about $100 a month on food for his 140 pigeons, plus a tank of gas each week transporting them for training tosses and races. Cupping a pigeon like a porcelain figurine, Lipski pointed out the bird's curves, its soft feathers, supple wings and bright eyes.
"To a lay person, they don't look any different. But to us we see the musculature, the shape and look of the bird, the shape of the head, eye color and how they hold themselves," Lipski said. Pigeon racers typically have old birds, new birds and breeders. After selecting breeding stock based on a variety of factors including racing performance, the birds are mated and eggs are hatched in the winter. They're usually weaned between 25 and 35 days old when they're put in a young bird loft.
Then they're trained to go in and out of their stalls by using a settling cage that prevents them from flying off but allows them to see their surroundings. Once they're comfortable, the settling cage is removed and the birds can come and go from the loft on their own, with food used to control them. Soon they fly farther and farther away but return to their loft to eat.
On race days, bird owners anxiously await their return.
"I wish I could explain it, but to see them come home to the loft is a thrill whether it's 20 miles or 200 miles," Lipski said. "When they get close to home, they fold their wings and dive down. That's a thrill."
Membership up nationally
The Milwaukee Western Concourse has about 40 members from Milwaukee, Racine and Kenosha counties, said Fred Hopper, the group's secretary, who has been racing pigeons since he was a boy in England.Lipski learned from his father and uncle, who began racing pigeons in the 1930s; now his son has about 60 birds. Schrank had pigeons when he was a boy in Germany; he remembers when the government barred people from owning them during World War II because they were used by the military to ferry important messages. Dave Smith of Waukesha has raised homing pigeons since he was a youth, stopping "only to court my wife." . . .
Posted by American Racing Pigeon Union at 10:47 AM