The New England party is done.  The race results are in. 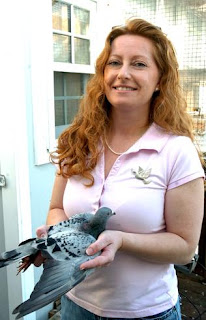 Fall River - Paula Desmarais of this city was not so surprised when her homing pigeon placed 16th out of more than 1,000 champion birds in a race over hundreds of miles this week.

The event was the centerpiece of this year’s American Racing Pigeon Union Convention.
Desmarais’ bird finished first in the south section of Massachusetts.

“We’ve placed first in Florida and won in national races,” she said.

What was so amazing about her bird’s finish was that it traveled against a prevailing 10 to 15 mph wind in only about 30 minutes longer than the overall winner, which flew with that wind, said her husband, Bill Desmarais, convention chairman.

Paula’s champion bird arrived home in the Flint at 2:32 p.m. in a nonstop flight of more than 312 miles, traveling nearly 1,400 yards per minute.

Owners and handlers of these amazing birds are able to record precise racing data on them as modern pigeon racing is a high-tech affair with computer chips attached to the birds.

The overall winners of the $30,000 first prize were Chuck Lopresti of Braintree, the winning bird’s handler, and Vincent Locieiro, the breeder.

Their bird had the fastest time of six hours, two minutes and eight seconds.

“They fly for the love of home and family,” Bill Desmarais said.

“I came in 35th,” said Bill, finishing 19 places behind his wife. “I’ll take a lot of ribbing because she beat me. I have to live with that until next year.”

Today at the Ramada Inn in Seekonk, the top 30 birds to finish the race will be auctioned.

“People like to buy for the blood line. It’s like a racehorse. People come from across the U.S. and all over the world to be part of the race, the convention and to put in a bid.”

He said this was the first time in the past century the convention was held in the Greater Fall River area.

“It is good for the area economy because those attending are spending money at local attractions, in the stores and restaurants,” he said.

The event is scheduled for Oklahoma next year and in San Francisco in 2011.