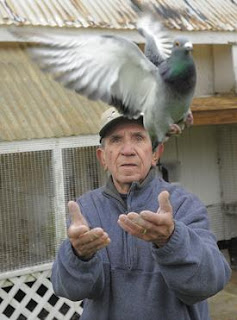 FALL RIVER — In the back of a house in the Flint, 200 pigeons coo and strut and sleep, waiting.

The birds belong to Bill Desmarais. Next weekend, some of them will join 1,200 feathered flyers in a race.

That race starts Saturday in Lyons, N.Y., and ends at pigeon lofts in Fall River and Chelsea, Swansea and Newton, and points all around the commonwealth. It is the centerpiece of this year’s American Racing Pigeon Union Convention.

The union is an umbrella organization for enthusiasts who like to race homing pigeons — a large but largely unknown fraternity of people who watch the skies, waiting for their birds to come home. There are maybe 100 committed pigeon flyers in Fall River.

“The birds have been coming in since February,” said Desmarais, sitting in his den, holding a calm pigeon in his hand as nonchalantly as some men might hold a cigar.

For a race such as this, Desmarais explained, pigeon owners from all over the continent send their 30-day-old birds to lofts in Fall River, where they are trained and cared for by local pigeon fanciers.

“They have to get acclimated to the area,” Desmarais said.

What the birds have to do, he said, is learn that Fall River is home, because what a homing pigeon does is come home.

No one quite understands how a pigeon knows where to go.

“They think that they get used to the magnetic pull of the earth,” Desmarais said. “But no, no one really knows.”

What pigeon men and women do know is that a pigeon must be trained and fed like an athlete. That means no day-old bread.

“They get protein, carbohydrates,” Peckham said. “It’s like training a marathon runner.”

Desmarais stretches out one wing of the bird he’s holding. The wing trembles, but not with fear.

About 500 pigeon fanciers will descend on the Fall River area for the convention, ready to check out the area’s attractions, attend pigeon seminars at the Ramada Inn in Seekonk and, of course, wait for their birds.

“The birds guys sent to my loft, those guys will wait at my loft,” Desmarais said.

And make no mistake, Desmarais’ pigeons live in a loft, not a coop.

“A coop is for chickens,” Desmarais said with a hint of scorn.

But money isn't the reason for the race. Pigeon owners like pigeons, and Desmarais puts an end to any notion that birds are bred as much for meat as for speed.

“We don’t send them up if the weather is inclement,” Desmarais said. “We care too much about them for that.”

The birds want to get home, too, Desmarais said.

“They fly the whole way without stopping,” Desmarais said.

The birds will be transported to Lyons, N.Y., in a sealed truck, watered and fed and then released at sunrise on Saturday. Then, everyone waits.

“At my house, we’ll have some of the local tastes,” Desmarais said. “Chourico, maybe some gorton.”

Each bird will wear a plastic ring on one leg containing a computer chip. The chip records the time the bird is released and the time of its arrival.

Since the lofts to which the birds are returning are spread around the state, the birds will race anywhere from 270 to 360 miles. The winner is the bird who flies fastest mile for mile, minute for minute. The computers count the time, down to one-housandths of a second.

There are numerous ways to make a pigeon fly faster. Many trainers will put a strange male in the loft before releasing their male.

“It makes him want to come back if he knows there’s another male in there,” Desmarais said.

Racing pigeons can be had for $100, but a champion costs $35,000. Desmarais displayed a four-page pigeon pedigree as complicated as the papers for a show dog.

Within six hours of being released in New York, birds will begin showing up in Fall River, having flown as straight as an arrow to get home.

“It’s not really a race,” Desmarais said. “They’re homing pigeons. Pigeons mate for life. It’s not about racing for them. It’s about who can get home, getting home to the wife and kids.

“It’s a nice sport,” Desmarais said. “It’s something you can do in your backyard, and families can do it together.”

And how did Desmarais get started keeping pigeons?

He recalls how a white pigeon showed up in his yard when he was a kid. He kept it in a cage in his house for a little while.

Ever since, Bill Desmarais has been waiting for his pigeons to come home.
Posted by American Racing Pigeon Union at 9:17 AM