A THANK YOU from the organizers ~


The Fisher House Auction was held at the Perth Amboy Racing Pigeon Club on the 27th of November 2011, and it was a HUGE SUCCESS. This was achieved because of an outpouring from the fraternity of the CU, IF, and AU Members, as well as, the Belgian & Dutch Pigeon Fanciers, thereby making this truly an International event. The pigeons that were donated,to say the least, were some of the best I have ever seen in one room; the excellent quality of these pigeons was evident by the high prices attained in the auction. The Co-Chairmen of this event were Eric J. Gioiosa and Stanley Krawiec, both Veterans and the driving force behind this auction/fund raiser for Fisher House.

We had a Super Event Team consisting of Bill Desmarais & his wife Paula, Lynne Earring, Henk Kuylaars, Big Andy Larenzatkis, Val Matteucci, Bill Mitiu, John Panek, Joey Perino, Edie Raia, Fred Smeltzer, and two of the Tyson Corner celebrities—Big Joe (Green) Swint & Vinnie (COACH) Torre, that made this event a great success. The Perth Amboy Club generously donated the use of their great clubhouse, in addition to a DOOR PRIZE of a bond for the PAOpen Futurity Race.

Additional generous prize donations included: bags of feed from Baden Feed in Canada, Vinnie Torre of Hoboken NJ, and Mike Bonomo of Staten Island. Also, Top SHELF Premium Wine from the Noble Brothers of California, a custom-made carrier from Mike Brazil of San Luis Obispo, CA, Chocolate Covered Delicacies from Kenny Larrey of Fresno, CA, and Pigeon Watches from Bill Desmarais & his wife Paula. The Desmarais’s also donated and hand-delivered the BIGGEST Live Lobsters you ever saw. Thank you ALL! 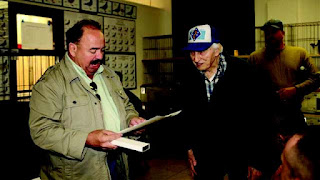 A very moving moment was when Bill Desmarais, AU Veterans Affairs Chairman, Vietnam Vet (Nov ‘68–Dec ‘69), Sergeant US MC presented Walter Lesnak (King Lou) 94 Years young, a watch & Fisher House Hero’s Medal in our little tribute to this veteran. He is a true HERO and was awarded in COMBAT the Silver Star, 3 Bronze Stars and the Purple Heart.  Upon him receiving the medal, the standing room only crowd broke into a thunderous applause.

Thanks to all that attended, thanks to the in-house buyers, and also to the on-line bidders on I-Pigeon. 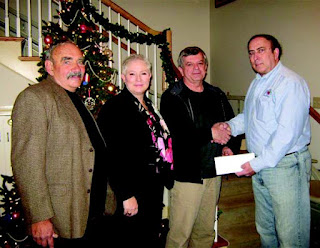 In closing, we would also like to give a BIG THANK YOU to Susan Lombard of Daybreak Design, Gene Yoes of the Racing Pigeon Digest, the American Racing Pigeon Union, International Federation of Homing Pigeon Fanciers,
I-Pigeon and Anthony Sorrentino for their generosity in making this event such an overwhelming success to the tune of a contribution of $24,148.50 to the Fisher House of Albany, NY.