Off to the pigeon races

From a young age, Steve Croghan has been a man of the birds. He was fascinated by a pigeon racer on his paper route, and has been keeping birds of his own since age 10.  “He used to call them and they would come sit on his arm and he used to feed them out of his hand,” Croghan said as he recalled his old customer. “That amazed me when I was young.”

For 20 years, the Hanson resident has been racing pigeons competitively. He has watched the sport change with the times and the technology, and now is hoping to provide the same kind of inspiration as the customer on his paper route all those years ago.

“All the older fellas are aging out of the sport and I’m trying to get the younger generation involved,” he said. “I’ve been trying to establish something for a while. There aren’t too many people out there who do this, so [younger people] aren’t really exposed to it.”

Croghan is hoping to create a youth program for pigeon racers with the help of local 4H clubs and the Plymouth Veterans Racing Pigeon Club, his chapter of the Boston Concourse and the American Pigeon Racing Union. He is planning an exhibition at this summer’s Marshfield Fair and a local information seminar to raise awareness of his sport and drum up some new interest.

The biggest thing Croghan says he will have to struggle against is the public perception of the birds based on feral pigeons. He equated racing pigeons to thoroughbred horses in that they have to have a pedigree in order to be allowed in the American Union. Racing pigeons are bred for specific races, such a sprinters and distance fliers, and a well-bred bird can go for as much as $182,000.

“When people think of pigeons, they think of flying rats,” Croghan said. “When you get a pigeon with a good breeding record and a good race record, they become quite sought after.”

Croghan keeps about 100 pigeons in his coop in Hanson in two racing teams. The racing season, consisting of two sections: old birds and young birds. The season runs from April to November. Local races consist of 500 to 700 birds, though it can get up to 25,000 in Europe, and races range in distance from 100 miles to 600 miles out to Sandusky, Ohio in a single day.

“If you are sitting at home after a pigeon has beaten its wings for 14 hours to come home from a 600-mile jaunt, it’s pretty extravagant to see,” he said. “They have a will and they love their home, and I just enjoy watching them fly.”

Croghan wants to model his youth program after the Northwest Junior Flyers, a group out of Western Massachusetts that boasts over 60 members. That group builds 4x4 starter lofts for their members to house eight to 10 pigeons, but Croghan said he would consider housing birds in his coop if parents don’t want them at the club members’ houses.

Croghan’s club in Plymouth currently has a membership of around 22 with one junior member, his 13-year-old daughter Megan. Megan Croghan began her pigeon racing career six years ago and as second in the national youth race last year by only two seconds.

“It’s pretty fun to race against all these people,” she said. “It’s fun to go in the coop and feed the birds. Sometimes, they’ll just sit on my hand.”

In addition to her second place finish in the youth race, Megan owns two wins over her father despite only being allowed to send out five birds as a youth racer compared to her father’s 15.

“It’s the first thing she checks,” Steve Croghan said. “She run down to the coop and check the times to see if she beat me. It’s a nice father-daughter thing and I enjoy racing with her.”
Posted by American Racing Pigeon Union at 6:23 PM 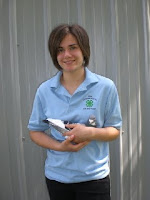 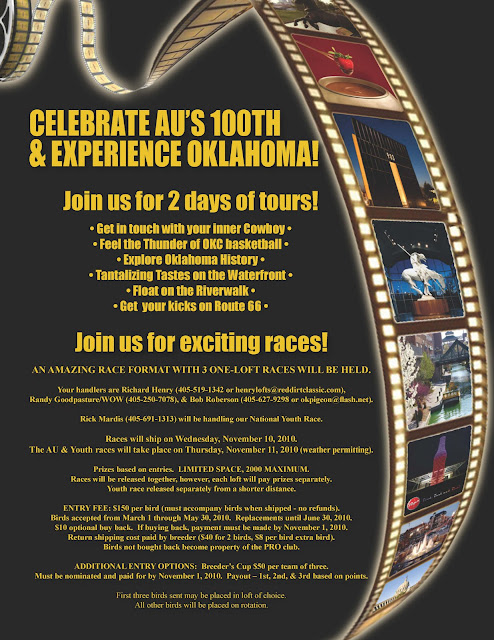 The Star Telegram reports:
These pigeons always find their way home, even 600 miles away
By SUSAN McFARLAND
Special to the Star-Telegram
Photo - Joyce Marshall
Scot and Susie Lindsey’s ride home from the Stock Show is a little less crowded than on the way there.

After their show pigeons were judged on health and appearance Saturday, the Lake Worth couple released more than a dozen birds out of the back of the poultry barn. Four were first-place winners.  Away the pigeons flew, homeward bound.

"They’ll be home when we get there," Susie Lindsey said. "I count them when we get home."

So is the life of a racing homing pigeon family.

The couple have been racing pigeons for more than 20 years. For nine years, Scot Lindsey has been the superintendent of the poultry barn at the Stock Show. That makes him the person who oversees the operation.

The trick is to raise the pigeons to know where to call home, so they always return no matter the miles.

How do they do that?
Training begins at three months, and consists of releasing the birds daily outside so they learn to fly on their own.

Eventually, the birds learn that when playtime is over, the ritual begins to call them home.

When they hear the call, down they come back, zooming back to their loft for the night, he said.

How far do they fly?
Once their home has been established, the pigeons are driven a little farther and released, progressively flying from 100 to 600 miles.

When released, they go up, circle a few minutes to get their bearings and then head home, Scot Lindsey said.

"The good ones go straight home," he said. "Some take longer than others."

"Some have been clocked traveling more than 90 mph," he said.

How are competition times calculated?
Today’s tech-savvy world makes things much easier than when Scot Lindsey began showing pigeons in 1989.

A chip is attached to the pigeons and scanned into a system upon takeoff.

When the pigeons get home, another scanner at the entrance of their loft enters the data as they fly by.

"Kind of like the scanner at the grocery store," Scot Lindsey said.

If the pigeon is taking too much time doing victory laps in the air over the house, a fancy pigeon (known as a dropper) is used as a decoy to bring the bird home.

"They follow the dropper," he said. "It lures the race birds in."

What kind of care is involved?
The Lindsey family owns about 300 pigeons. The lofts they are housed in are cleaned and disinfected daily.

Every day, the birds are fed twice and given fresh water. They eat a mix of corn, wheat, safflower, Canadian peas, maple peas, buckwheat rice and sterilized hemp seed.
Posted by American Racing Pigeon Union at 10:07 AM