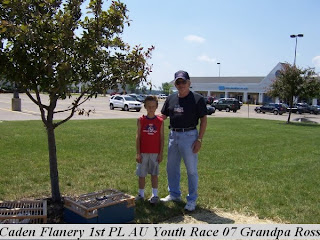 Rich Ross races as an individual member of the AU, in Michigan, under Blue Diamond Family Lofts.  He told us about his recent experience sharing his sport with youth.

- Our church was having a General Assembly where ministers and their families from all over the country were coming to Michigan for special seminars. I got a call from the church asking if I could talk about racing pigeons and do a release for the kids ages 5 to 8 years.

We set the date to talk to the kids and then do a release at the Tanger Mall in Howell. I had my grandson, Caden Flanery (8 years old), who took 1st place in the AU Youth Race in 2007 help me set up for the release, as well as Judy my bride of 43 years.


The day of the release started out to be a beautiful sunshine Michigan day. Only thing was we had 15 -20 mile SW winds which would blow the birds away from the loft. These were young birds and had been to this location 4 times and I was confident we would have a good release. 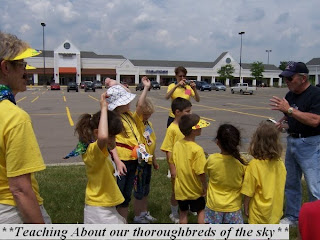 During the bus ride to the Mall, the kids watched the video “Marathon of the Sky” and came off the bus very excited.  The bus arrived around 2:30 and we had 2 baskets full of birds ready to go. As the kids and their chaperones gathered around, I told the kids how God had made these magnificent birds and they can fly for hundreds of miles and still find the way back to the loft. Then I asked who wants to hold and release some birds.  All the hands went up. Even the adults that were chaperoning had their hands up saying “Can we release them too?”


Each kid had a chance to hold and release a bird and then the adults did that too. I rode back on the bus with the kids to my loft, while Judy stayed back to release the other basket of birds. We got down the road about 2 or 3 miles when dark clouds came in and we started to see a few raindrops. I called back to Judy and asked her how the weather was and she said a little overcast but it was good.


I started to get a little concerned because the sky was getting a little darker and in Michigan the weather can change in 10 minutes. I thought a storm was coming in from the west.  When we were a mile from the house I told Judy to release the birds. As I pulled into my driveway the skies opened up and it was raining so hard you could just about see my house.  I called Judy back to hold the birds and she said its too late the birds are up. She got a block away from the mall and it started raining.


I ushered the kids into the garage to keep them dry but they wanted to stay in the rain under the eaves on the deck to wait for the birds to come back. One of the little kids said to me “Do pigeons fly in the rain?” I said a little prayer and said boy I hope so. After about ½ hour that seemed like eternity one young bird came in and a little later, the other birds started arriving.  Seems the older, more experienced birds, flew around the rain, while the younger ones flew right through it.  Only 2 birds stayed out overnight and came in the next day.  God does answer prayers. -
Posted by American Racing Pigeon Union at 3:00 PM